Latest News from the Band

....... Aldo Rock. A fantastic guy, who gave us some great moments, on and off stage and left behind a great legacy - we pay tribute to him this Friday, at the Aldo Rock Festival - Live at the Music Room, Majestic Hotel, Bur Dubai.

Aldo was a huge supporter of the Local Music Scene and Musician and was always at hand with words of encouragement, and constructive advise on constant improvement. Be it technique, style, sound, promotion and down right practical advise on the music industry. He helped us with sound on our first ever gig, which got Core started 6 years ago and ever since Aldo stood by us, played with us, jammed with us and today we look back at his legacy with Pride and Joy - and we go Rock the Stage in celebration of his life.

Come watch 7 other bands along with Core 304, this Friday, July 21st at the Aldo Rock Festival. 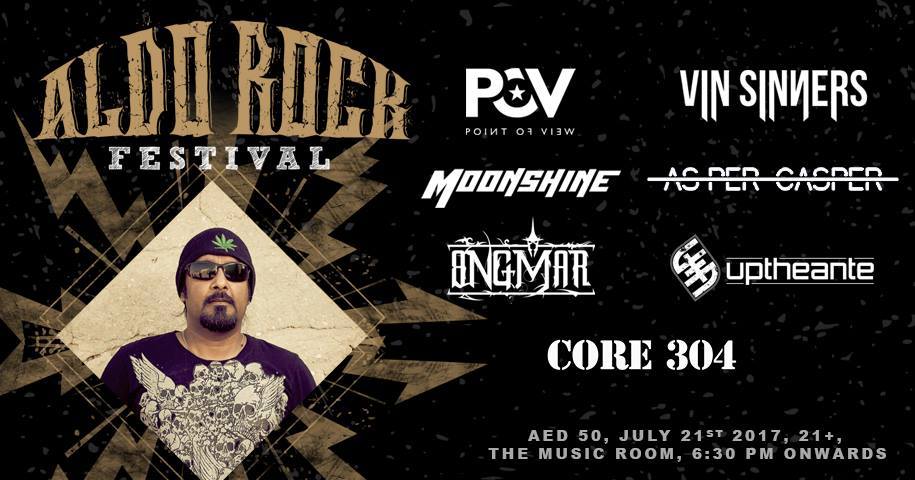 Thoroughly stoked about getting an opportunity to go place in the land of the great mountain range - The Himalayan Range, with the mighty Mount Everest. Also the Land of Great Rock Legacy, with great music, musicians and fabulous audience. We have heard so much about the music scene in Nepal, and with a large fan following in Dubai from Nepal, we are really, really excited to travel to the Himalayan Nation and Rock the night on Saturday 3rd December 2016. Watch out for this space for more updates, photos and experiential anecdotes from the trip. 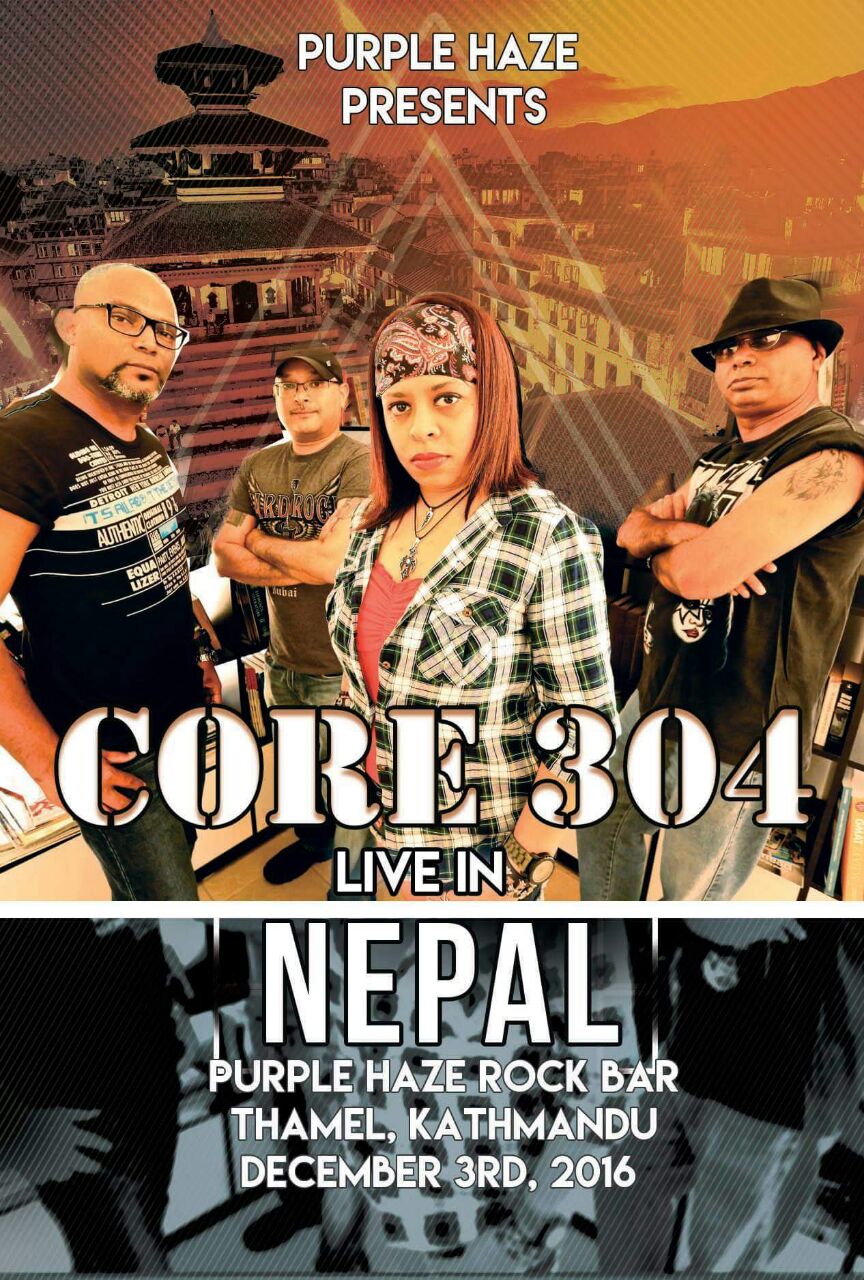 ............since we rock and roll, or blogged on the site ........... no real logical reason to speak about, except the usual life happening all around us - since we got back from our gig in Koh Samui, we had a few shows in Dubai, went into the studio to record some material and here we are preparing to get back on Stage at Music Room on the 12th of August 2016, sharing the stage with some awesome local talent and the Guest star of the evening - Gary Lawyer.

Its going to be a Classic Rock feast on the night and we are going to be smack bang in the middle of it. Catch us Live from 9.30pm, Live at Music Room, Majestic Hotel Dubai. We gonna rock it and roll it till you can't control it, just saying!!

We are told Samui is not a destination you just go and play a gig - its a destination you go and play a gig and then some...........from Snorkelling, to underwater walking, to parasailing, banana boats, scuba diving or just sitting by the beach doing nothing, to rehearsing for the show while sipping a Colada, anythings possible and we sure think a bunch of the above are definitely up for grabs ............ yeah and we will play some music while we are at it!

So thats it folks, we will see you at a venue near you as soon as we are back to base - look out for some new material from the band. Stay safe and rock and roll until next time.

.........Tolentino Fernandes, aka Tolo - Guitarist with Core 304 and a founder member, a very Happy Birthday.

And on this grand day, we also launch a VLog series called - 'Know Your Core' in short KYC - a collection of short video clips of the band members and their associates, who help us put shows and material together, talking about themselves, the lives they lead, their passions, dreams, aspirations and general ramblings that you would expect musicians and technical folks from the music industry to ramble on! The first video is aptly on the Birthday Boy, Mr. Tolo and you can click on the link below to view it. Leave us your comments on how you like it, what would you like to see on future VLogs and just generally what ever you want to......we love to hear from you. Enjoy!


Know Your Core - Series One

........four dates this November to catch Core 304 Live on a stage near you. Head on over to the Events Tab on the top of this page to look up the dates and venues where we will be performing this month. New Events get added frequently, so keep checking for dates that suit your schedule. We will love to see you rocking front of stage with us!

A new gig at the Emirates Bike Festival just got added to our Gig List, slated for the 19th of November, this will be our Second gig associated with the Bike Show, the first one being last month at the Gulf Bike Expo at the Dubai Autodrome...........the Emirates Bike Festival is being held at Bay Avenue, Business Bay and promises to be a Thunderous mixture of Bikes, and everything to with Bikes..........looking forward to our first appearance at this festival.

.............onto the Open Mic Stage turned out to be one helluva fun night. The venue was Pier 7, O Cacti - the mexican restaurant - a nice stage set up with a full compliment of sound and light arrangement - and a dozen or so amazingly talented musicians - and of course Core 304. Our good friend and an amazing drummer of many year, Mr. Rajesh Iyer, graced us with his presence and jammed along with Core and other jammers to his hearts content, adding that special touch, only he can.

A big shout out to all who came last night, you guys were awesome - and a huge huge heartfelt thanks to Olga who put the show together and the amazing venue for hosting us. Support for the local musician is on the rise, and this was a clear indication of that fact. We just absolutely loved it and look forward to returning in the near future.

Our next show is the Friday Night Live series, on the 13th of November, and yes its Friday - Friday the thirteenth.............something special is being cooked for this one, watch out for more news on this gig in the coming days. Till then, hang loose, rock your dog or the neighborhood or even better - the whole frigging world!

.............outing at the Gulf Bike Expo last weekend, our gig calendar is filling up for November, with 3 new gigs added this morning.......check out our Events page for more details on where you can catch us Live next.

In the run up to the year end, the bands been busy putting together plans for new tracks and working out details on some new and exciting stuff...............with new sounds being shaped and added to our sound bank, experimental set lists, new song idea's, and even plans to come up with some interesting combinations of songs that we plan to unleash on our set lists very soon.

............Gulf Bike Expo starts this weekend, and we are back, Live on stage for a second year running...........this being part of our annual gig calendar...........looking forward to rocking the stage on Saturday 24th October 8p.............a set list with songs dedicated to the Steel Horse Riders, the Rebels, the two wheel warriors, who will be out in full strength, in their leathers, chrome and all things shiny. This is one gig we look forward to every year, it fits the bill and is classic to the Core...........you get the drift. Right up our Ally.......come watch us do our thing and a whole lotta cool Bikes and all things related to Bikes..........

............feeling and the adrenaline wears off from our recent Canadain Tour, life is getting back to some resemblance of normalcy for the band........with regular practice sessions, new gigs plotted on our calendar and hectic activity towards booking important gigs for the end of year celebration parties.

With two gigs already on the way in Oct - 24th at the bike week and 30th at Legends Sports Bar, Nov and Dec are also starting to fill up.........watch out for this space on news on upcoming gigs, click over the Events Tab and see whats already scheduled for the next few weeks, and we hope to see you beautiful people at one or more of the venues in the near future..............

Whats Core up to?

We get asked this a lot. So what are you guys upto? Any gigs coming up? What new material have you written?

Its what fans, well wishers, supporters and frankly even we want to know. So apart from actively setting up practice sessions on a weekly basis, working on a master song list of cover songs that we would like to cover - a list that grows with every show, taking inputs from the audience, request slips that we get passed on in shows and quite frankly building on the library of songs that people just love to hear live. This is one thing that Core has been able to deliver and has had its finger on the pulse for a long time. Three years in the making, this list helps us put on great set lists out there, surprising people and pleasing them at the same time. Songs that traditionally are not played in the 'Pub-Circuit', taking cover songs and putting a twist to them has been the hallmark signature of Core 304.

Never wanting to sit still, or rest on the last shows applause, the team at Core is always curious and inquisitive on how to make the next song different. How do we 'Core-ify' the next cover, is the usual banter in the band on most practice sessions. Whether it be the start, breaks in the middle, melodies from old Hindi movies woven into Rock songs or endings that dont sound anything like the original, however fit in there as if they were meant to be - almost like an ending that never was!!.........and building on the response we get for each twist. Some work, some kinda dont work. So its an evolutionary process and like all evolutionary process you live and learn. There is no MBA in Evolutionary Process at Harvard that we could find, so we just live it.....and roll with it, coz its just Rock and Roll, but we like it !!.